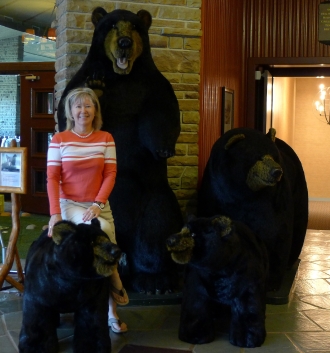 We didn’t have to go into the woods to see a bear on this trip to Jasper. It ambled out to greet us as we slowed down to pass through the east entrance  of the National Park gate.

Not 50 metres ahead on our left something big and black was emerging out of the ditch. We braked as the black bear paused to look right, then right at us, and then left before bounding behind our car in heavy, loping strides across the undivided highway. It stopped on the other side–to catch its breath no doubt–then glanced back at us before lumbering into the forest for berries.

Normally my camera is within reach whenever I go to the Canadian Rocky Mountains, but it was nearly 9:30 at night and I just assumed the park’s most photographed wildlife were tucked in for the night. How wrong I was.

Driving into the park before dark in the springtime is one of the best times to see wildlife, the woman behind the counter at the Visitor’s Information Centre informs me the next morning. “There’s still a lot snow on the mountains so they have to come down to the valley for food.”

She hands me a binder to enter the date, time and location of my bear sighting, asking me to note if it had a colourful tracking tag in its ear (it didn’t). A quick scan of previous entries showed several black bear and grizzly bear sightings in the last two days, but most were spotted along the highway at the other end of the boomer-rang shaped railtown.

More than 300 black bears and 200 grizzlies call Jasper National Park home. And with one of the largest protected populations of Grizzly bears in the world, this really is the best place in Alberta to spot a bear.

A train runs through it

The townsite of Jasper, 370 km west of Edmonton, is pretty much in the middle of nowhere in the largest Rocky Mountain national park in Canada. Surrounded by glacial mountain peaks, cold clear streams, breezy alpine meadows and vast unexplored forests, this relaxed and friendly mountain village appeals to outdoor adventurers, nature lovers and recreation enthusiasts alike, with 300 km of biking trails and 1,300 km of back country trails and campgrounds.

It’s the most remote community in Alberta’s national parks, and in testament to its isolation, Jasper National Park was designated in 2011 the largest Dark Sky Preserve in the world by the Royal Astronomical Society of Canada.

It took the arrival of the Grand Trunk Pacific  (GTP) Railway line in 1911 to turn this 1907 fur trading post into a small community. The town was also served by the Canadian Northern Railway until it amalgamated with GTP to become Canadian National (CN).

Each year, two million visitors make their way to this frontier town by train or car. Some will continue another 800 km west along the Yellowhead (Hwy 16) to Vancouver while others take the 400 km scenic loop south down the Icefields Parkway (Hwy 93) through Banff National Park to Calgary.

When I see the northeast face of Roche Miette, I know Jasper is just on the other side. It’s not because 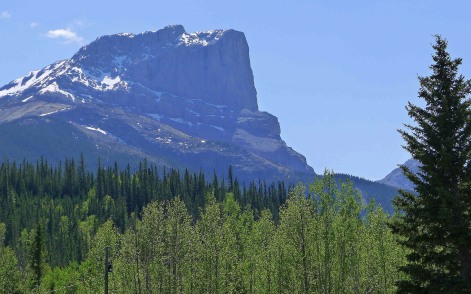 the 2,316 m (7,600 ft.) mountain dominates the east entrance to the national park (it does). It’s because the rock has formed a familiar face. Look closely and you can see the side profile along the top ridge of this famous landmark. Follow the snow-covered strands of white hair cascading down from the forehead and trace the eyebrow, sharp nose, jutting chin and long neck.  I know spring symbolizes youth, but this man always looks older in the spring when the snow-capped peak gives him longer, whiter hair.

Driving around the mountain on our way to the Fairmont Jasper Park Lodge, we see several young and dainty mule deer, a scruffy, shedding bull elk and a group of female elk on the roadside. With the northern sun still awake at 10 p.m. in May, it’s not hard to spot wildlife by the side of the road. Wolves and coyotes, while common to Jasper, are not roadside plant nibblers. Moose prefer the marshes but the mountain goats and Bighorn sheep often cluster by the road to lick minerals from the surface.

May is also elk calving season in Jasper and our handout at the gate from Parks Canada warns us to keep three bus lengths away from a lone female elk or a lone calf. Elk come into campgrounds in the spring to calve away from predators like wolves, bears and cougars, it said, and mothers will aggressively kick and charge at people to protect their newborn.

My sister and I once saw an angry rutting bull elk stomping and snorting when a man with a camera came in between him and his female harem walking through our campground. We scrambled from the picnic table into our vehicle and watched the threatened man freeze behind a big tree while the flaring nostrils of the elk’s bowed head sniffed him out.

Old railway hotel gets spruced up

Although more rustic than royal, the Fairmont Jasper Park Lodge is one of those iconic railway hotels like Toronto’s Royal York, the Hotel Vancouver or the Empress in Victoria. When the transcontinental rail line through the Rocky Mountains was completed in 1885, it linked the green-roofed, castle-like hotels of Banff Springs and Chateau Lake Louise.

Built 90 years ago, Jasper’s luxury lodge is situated before a backdrop of Lac Beauvert and Whistlers Mountain. I feel like I’m standing in a postcard taking this photo. Over 400 guest rooms are scattered in quaint cabins around the lake on either side of the lodge. King George VI and Queen Elizabeth I stayed at the private Outlook cabin on the furthermost point on the peninsula. In our hotel room, a framed black and white photo shows Sir Arthur Conan Doyle at a family picnic here in 1914.

Canadians may be forgiven if they don’t remember which railway owned JPL before it became the property of Fairmont Hotels and Resorts. If you guessed CP Railway you’d be right. If you said CN Railway, you wouldn’t be wrong. CP Hotels bought JPL from CN Railway in the 1980s and sold it to Fairmont in 1998.

While the rustic is wearing a little thin in the cabins, the lower level of the main lodge has undergone some major renovations in late 2010. Most welcome is a new 10,000 sq. ft. spa and the new Cavell Restaurant and Terrace offering lakeside gourmet and casual dining with a tasty lifestyle cuisine menu and patio dining. A supervisor assures me the cabin renos are coming after the the main lodge upgrades.

I avoid gossip as much as the next gal, so I waited until the server in the lodge’s Emerald Lounge put down our drinks before asking where the fire was earlier in May.  It wouldn’t be the first time one of those wooden cabins burned to the ground, I thought. “Right above your head,” she said.

We follow her pointing finger up above the buffalo head on the tall stone fireplace to where chimney meets roof. According to the local Fitzhugh paper, a hot ember from the fireplace chimney landed on the roof and ignited the wood shingles and spread to the roof substructure.

Was there no smoke billowing down the giant fireplace, I ask. The lounge was a bit warm, she admits, but the patio doors were open to the mountain fresh air and there was no telltale smoke.

She said it was a hotel guest who spotted the fire on the roof, and the volunteer fire department from the lodge and Jasper leapt into action. Fireman cut holes in the roof and doused the structure with water. Our server reports the fire was out in three hours and the drenched lounge was only closed for one day.

The next morning, in the new spa downstairs, the woman painting my nails says she was giving manicures to women in a bridal party when the fire alarm went off.

Standing out on the lawn, she began to worry about her work prospects if the lodge burned down. I could only imagine what the bridal party was thinking, standing out there on the grass the day before the wedding guests arrive.

The Fairmont promises to turn moments into memories, and all ashes aside, Jasper Park Lodge has that breathtaking beauty you just can’t forget.

One thought on “Bear spotting in Jasper National Park”